“Human history teaches us, however, that economic growth springs from better recipes, not just from more cooking.”

Back in 1965, the Gantt Chart was viewed with some skepticism.

In the 1965 published book, “CPM in Construction Management”, the author, J. O’Brien, challenges the notion of a new visual planning aid.  If the bar graph is so well suited to construction activity, why look for another planning aid? The reason lies in the fact that the bar graph is limited in what it can present. In the preparation of the bar chart, the scheduler is almost necessarily influenced by desired finish dates, often actually working backward from the completion dates. The resultant mixture of planning and scheduling is often no better than wishful thinking.

If a bar graph is carefully prepared, the scheduler goes through the same thinking process that the CPM planner does. However, the bar graph cannot show (or record) the dependent tasks which control the project progress. Later, even the originator is often hard-pressed to explain his plan using the bar graph.

Nowadays, the Gantt Chart has many supporters.  Gantt chart has evolved to become the primary means of communicating project plans and for good reason. The Gantt chart is the primary visualization method in many of the project scheduling software options available today. Gantt chart software was created to automate the planning and scheduling process to create task dependencies, add milestones, or identify the project’s critical path.

But then a Gantt Devotee Broke Rank.  In 2012, Dave Garrett, founder of the online community ganttheads.com sent an email to his network with the subject of “Subject: Project Management is Changing (and so are we…)”.  The well-known project manager recognized the coming changes saying “…times change and many project leaders are much more focused on their KanBan Boards than on a linear schedule.”  He changed the online community name to Project Management, noting changes to tools and approaches. 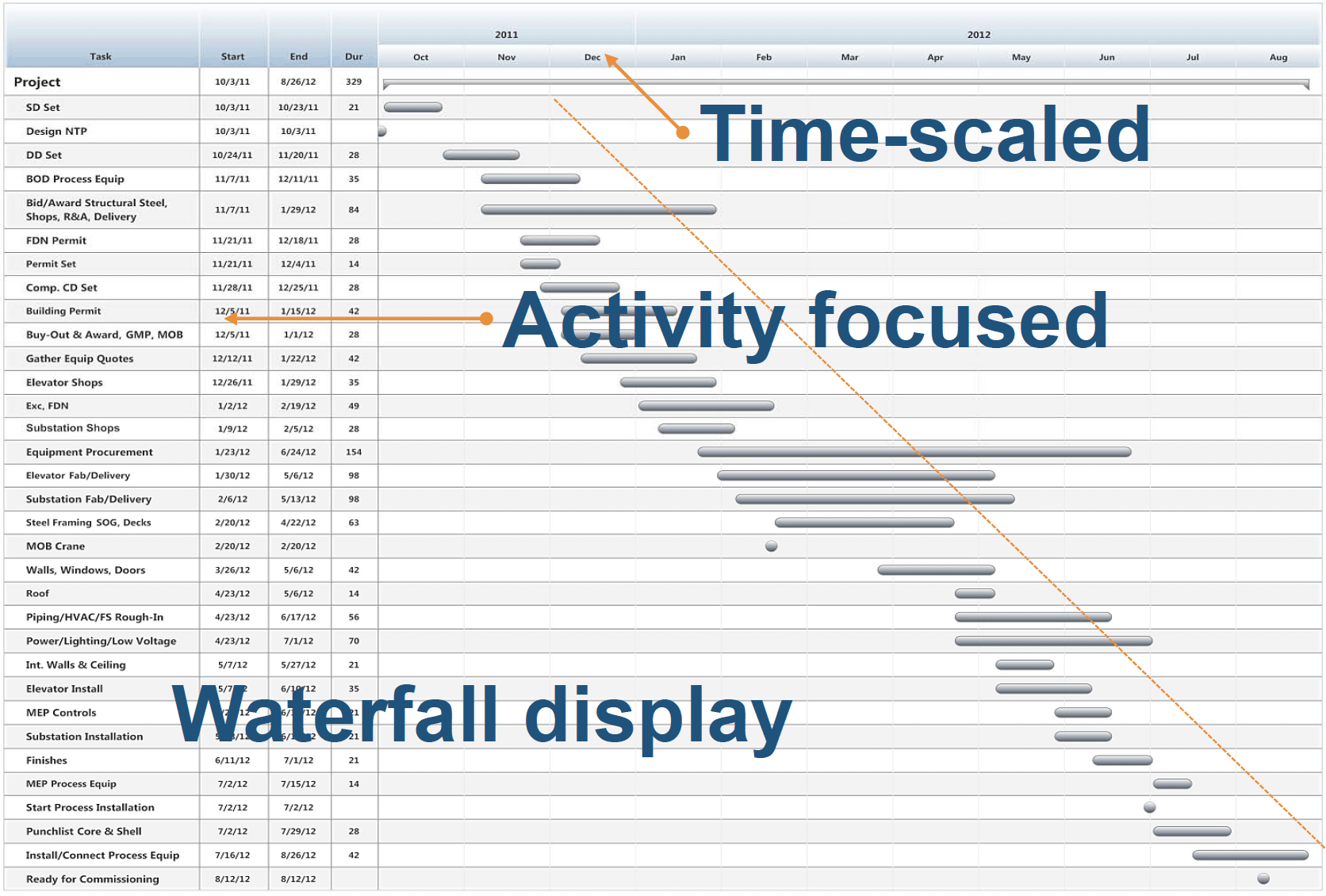 “…times change and many project leaders are much more focused on their KanBan Board than a linear schedule.”

A Century Worth of Gantt Charts

2008 Dr. Gui introduces the graphical path method or GPM® at the PMI College of Scheduling Annual Conference in Chicago

What about Excel Gantt charts?

GPM Alternative to the Prior Logic Gantt Charts

Original network notation introduced with CPM in 1957; arrows are used to denote activities, and finish-to-start (FS) dependencies are modeled by connecting the finish nodes of activities to their respective successors’ start nodes.

Network notation introduced in 1961 and extended in 1963; boxes or scaled task bars (shown) are used to denote activities, and activities are connected with logic ties to model FS dependencies and PDM dependencies known as start-to-start (SS), finish-to-finish (FF) & start-to-finish (SF)

Time-scaled network notation introduced with GPM in 2008; dimensioned bars with end nodes are used to denote activities, and activities are connected with multiple-arrow links through their end nodes or embedded nodes to model FS dependencies or PDM dependencies, respectively.

The LDM Approach to PDM Logic 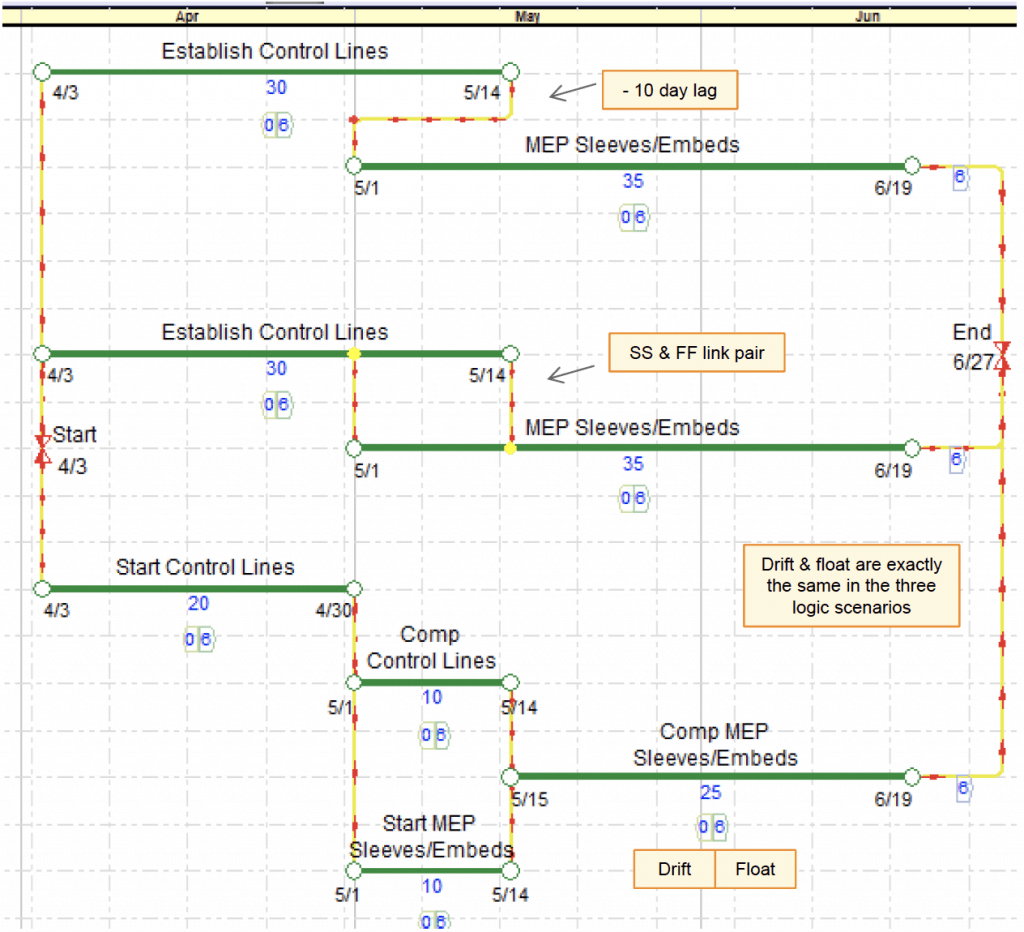 Because GPM calculates total floats as of 31 Jan 13 both before and beyond the data date, GPM algorithmically identifies the critical path left of the data date

Data date (DD), the update closing date, splits the updated schedule between the progressed (as-built) portion left of the DD and the forecast portion right of the DD

Because GPM upholds the then-existing critical path principle, collapsing the as-built schedule in segments yields a solution that is symmetric with the retrospective time impact analysis counterpart

Context is the Key to Resource Leveling

Summarizing the GPM Scheme of Thought

Is CPM with Gantt Charts Outmoded by GPM?

Who are the Early GPM Adopters?

Articles, Netpoint
Is your team keen to utilize the most important project management tools when planning their projects? Statistics indicate that organizations that adopt robust project practices are more likely to achieve their project goals (77% vs. 56%), stay within budget (67% vs. 46%), and meet deadlines (63% vs. 39%), and much less likely to experience total ... Read more