The future of project planning using the Graphical Path Method

Dr. Vivek Puri has significant experience with planning and executing projects in both construction and information technology areas. Dr. Puri’s recent work involves research and development relating to NetPoint, NetRisk, and Schedule MD, three innovative tools developed in-house by PMA. His doctoral work was in the area of simulation applications for construction planning.

What is the Graphical Path Method?

Graphical Path Method or GPM is a mathematical algorithm used to schedule tasks in a project. The algorithm provides an efficient update mechanism by which a change to the plan triggers an update that is limited to affected objects and unlike CPM does not require a complete forward and backward pass on the entire network. This enables real-time feedback from the GPM scheduling engine which allows the user to interactively cause a change to the schedule and see its impact on other activities or milestones. 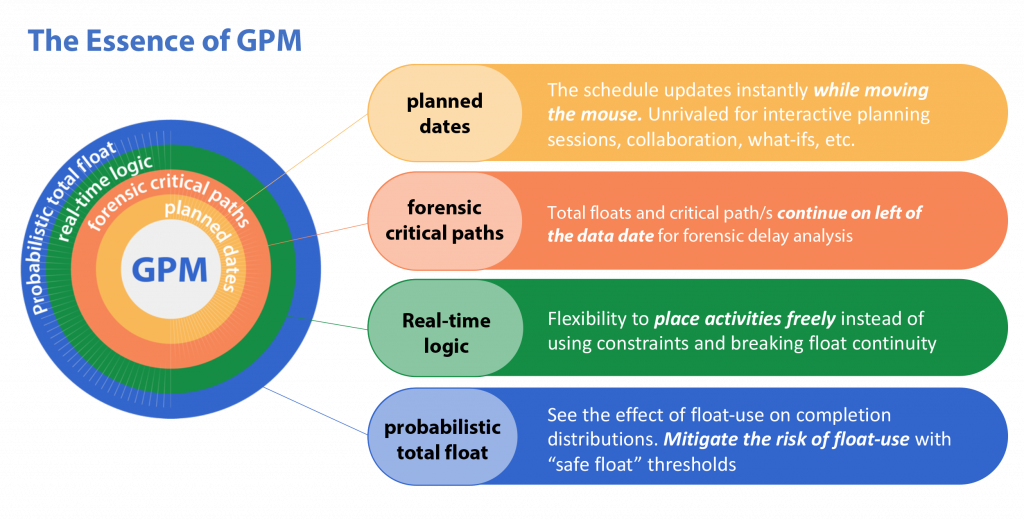 How is the Graphical Path Method different from CPM?

There are a number of differences between CPM and GPM. The most notable being that unlike CPM, GPM algorithm does not need to recalculate the entire schedule when a change is made to one of the activities or relationships.

CPM algorithm uses the relationships between activities and their durations to calculate the early and late start and end dates for each task along with calculating the available float for each activity.

What are Planned Dates, and how do they improve planning and scheduling?

Planned Dates in GPM provide the scheduler with the ability to specify the dates of when a particular activity in the network is meant to be worked on. In real-world projects, activities do not necessarily start on the earliest possible date when its predecessors are complete. However, often the activity start gets delayed for example due to lack of available resources, or in the case of parallel tasks to avoid excessive need of starting and then stopping of the activity so that the other task can catch up.

Use of planned dates thus provides that added flexibility and the schedule accurately models a real-world plan for the project. In CPM, the typical approach to hold the dates is to add constraints to these activities, which in turn affects the continuity of the float in the network. Planned dates in GPM however do not affect the total float for any activity in the network, but instead adds to the flexibility by representing the total float as a sum of backward float (Drift) and forward float (CPM Float).

What are forensic critical paths and how are they important?

An important aspect of any project is identifying and documenting the as-built schedule. This is done simply for documentation and to aid in future planning of similar projects, but also documenting how the project evolved over time is very important in the unfortunate scenario of evaluating claims. Since the critical path may change as the project progresses so it is necessary to know how the project evolved over time and assess how specific delays affected progress on the project.

In CPM based tools, the float of all completed activities is not calculated or is set to 0 because there are no early and late start dates left of the data date. However, in GPM since the algorithm relies on the gaps to calculate floats, which also exist left of the data date, thus a continuous critical path is available from project start to project end. 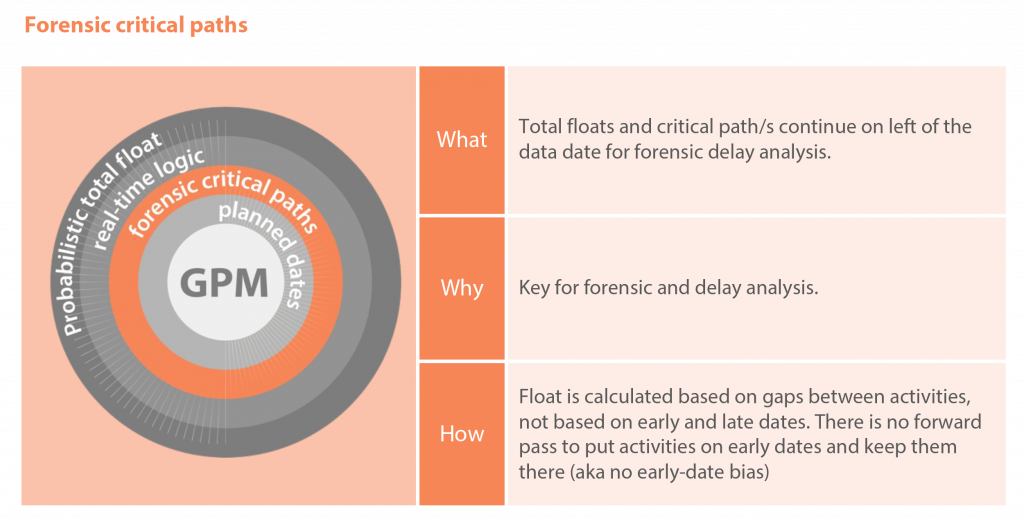 How is the forensic critical path calculated?

How does GPM account for real-time logic? How is this different from CPM?

CPM algorithm runs in a batch approach wherein a forward pass is first run on the entire network to establish a project end date. The project end date is then used while running a backward pass thereby calculating the floats on all activities and identifying the critical path. When a change is made to the network, the whole network needs to be recalculated using the forward and backward pass approach to determine the new dates, floats, and critical path.

What is probabilistic total float? How does it improve project risk analysis/simulation?

Probabilistic total float of an activity is the amount of time available for any task by which its start can be delayed without affecting a given project finish date, considering the risks and duration uncertainties in the network. So it is similar to float in deterministic schedules, but takes into consideration the stochastic nature of the dates and durations in the network.

Since the probabilistic total float is calculated with uncertainty in the schedule, it provides a more accurate narrative of how much flexibility the schedule really has and helps in decision making when certain tasks need to be delayed or floated. 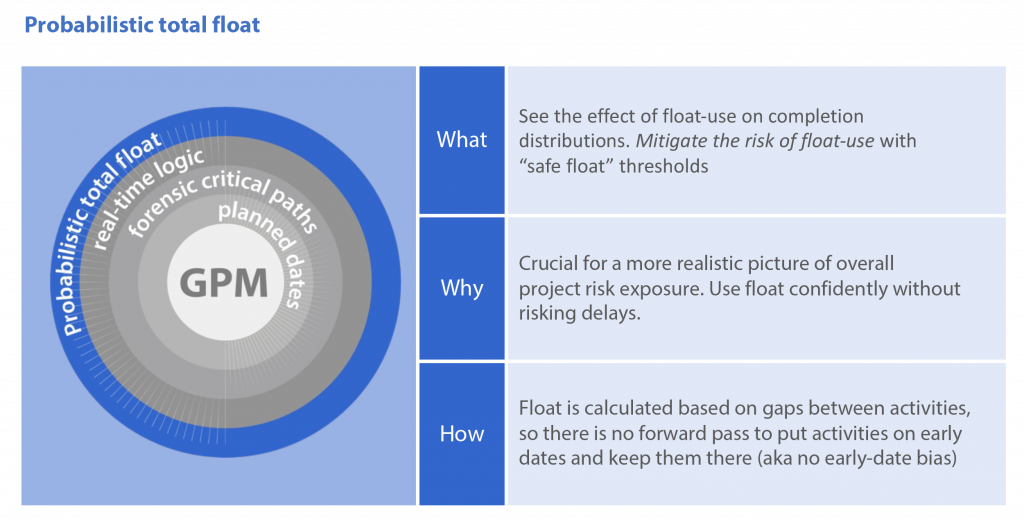