How to Compare Construction Project Schedules to Measure Progress and Delay

What happens when your construction project is delayed? How do you determine what’s wrong and how to fix it? If you are a project manager or scheduler, you compare the baseline schedule with the current progress to find the variances. In the following project descriptions, learn how PMA schedulers used NetPoint to find the variance in construction schedules, identify delays, and build a schedule that would meet the team’s target completion date. These examples of variance and delay are derived from two similar but distinct projects.

For those not familiar with the term, the baseline schedule is one which has been agreed upon in the construction contract by the stakeholders and against which the progress of the project is measured. Baseline schedules can be used to measure performance as the project progresses through time, compare anticipated future progress, or assess the need to perform what-if scenarios.

The project represented is a $40 million hospital addition that provided an ICU and more surgical space to a conjoining hospital. PMA became involved in the middle of the project when the construction company required additional project management help. The best project scheduling practices were followed in order to provide a critical path summary with every update. After updating the schedule progress, the schedulers copied that unchanged critical path and added a few delay activities to show the variance between the two updates.

Using a side-by-side schedule comparison, NetPoint visually isolated the critical path to show difference between two updates that pushed out the project completion dates. The two different schedules were reviewed on the same sheet of paper. The ability to compare two updates within one document helped not only the project team but also other stakeholders to quickly address the problem. The scheduling software and the critical path method allowed the team to see areas that were ahead or behind schedule. They were able to receive dynamic feedback from the visual target mode, identify the problem area and its effects on common stream activities, and perform a what-if analysis towards schedule recovery.

This scheduling method revealed that a 12-day extension, attributed to winter weather, and a 3-day extension due to downtime occurring during the Christmas holiday were required to complete the superstructure. The contractor was able to install the perimeter wall frame at the construction site more quickly than previously planned and the contractor also added more resources after New Year’s Day, which effectively cut down the time frame for that activity by five days. That resulted in a 10-workday extension to their project completion date, so the contractor knew where they stood with regard to their contractual requirements and were then able to begin formulating a recovery plan.

The suitability of NetPoint in illustrating project schedule delay arises from its developmental history. NetPoint in its earliest days evolved from a tool that PMA was developing to build schedule demonstratives that could support delay in litigation and arbitration. Here we see NetPoint deployed on another $40 million hospital addition. This scenario focuses on presenting delay versus simply reporting on variance. While delay builds off variance, delay discussion requires evaluation of activity slippage and its impact on project constraints and requirements with a focus on how to substantiate the delay.

The project schedulers view their goal as providing the truth about project progress in many different modalities. These modalities included presenting the original plan, describing how work was supposed to occur, drawing attention to a change, and pinpointing how that change should be remediated. Who or what is accountable? At the end of the day, the schedulers need to present how much time or how much acceleration is to be granted.

In this case, the contractor encountered various issues with steel design, including some missing steel as well as steel that was incorrectly sized. This example compares the baseline schedule to a post-impact critical path in which steel fabrication started approximately 45 days late. Compounding the effect of the delay, the redesign effort required more steel to be fabricated which increased the amount of time needed by the steel vendor.

This simple diagram was able to focus the owner’s representatives’ attention to the impact on the original plan and resulted in an approved extension of the project duration as well as modification of the general conditions. 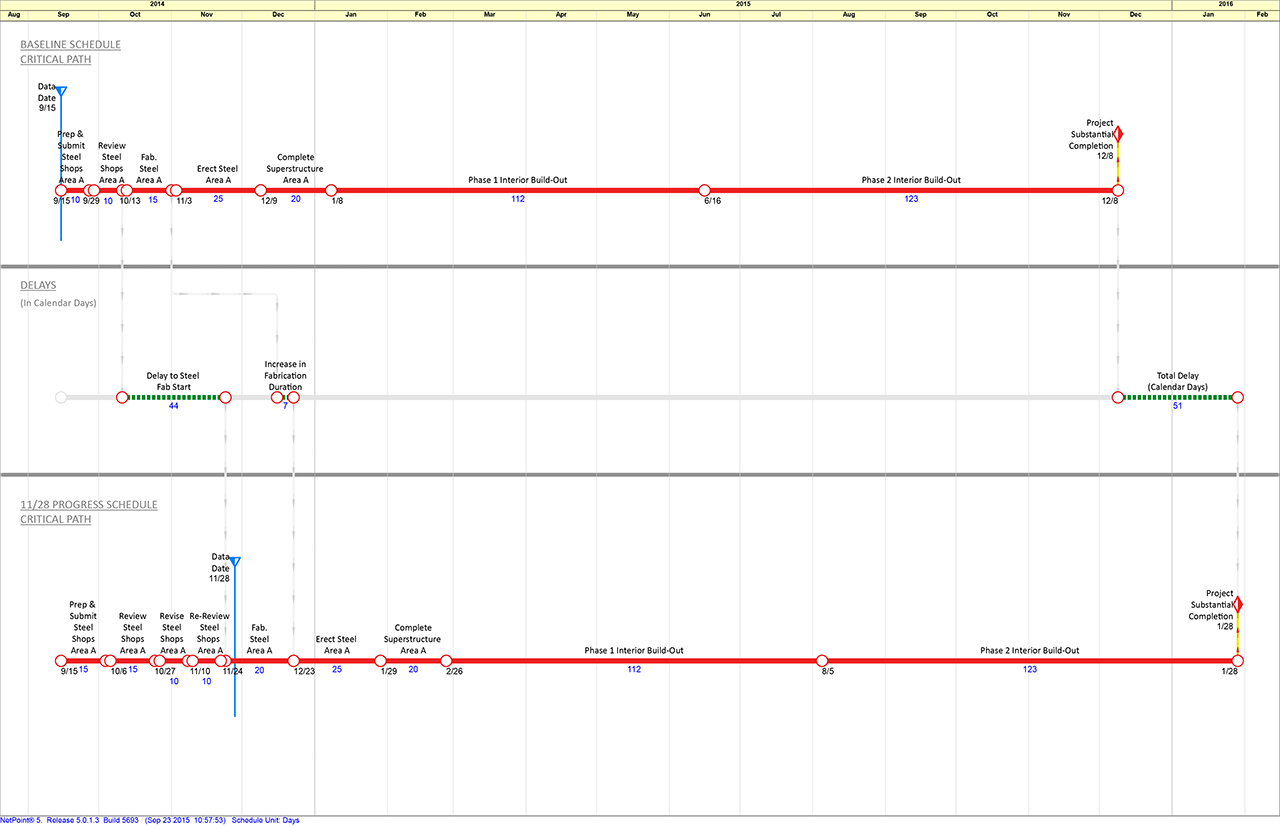 The schedulers provided a baseline schedule looking at a pre-impact versus post-impact scenario. In this case, approximately two update periods between two files. In the space in between, they put in a section to highlight the 44-day delay to start steel fabrication and the 7-day increase in fabrication duration, as well as some links that were faded in order to highlight where they would be inserted into the network and their corresponding impact. Consequently, it was easy to trace the steel fabrication start date to where it was currently scheduled to begin in a progress schedule.

The project schedulers were looking at a pre-impact versus post-impact scenario and wanted to represent multiple progress submittals, so two different data dates were inserted by using a milestone with a tail colored in blue. The data dates represent where the project was at that point in time, with respect to these two different scenarios.