What is the Critical Path Method (CPM)?

Since the mid-twentieth century, the preeminent scheduling technique used in project management has been the critical path method (CPM), a project modeling system pioneered by James E. Kelley, Jr., and Morgan R. Walker in 1957. Working with two American companies, the DuPont Corporation and Remington Rand, Kelley and Walker provided a computational algorithm for schedule analysis, calculating the start and finish date of each activity in a project. These start and finish dates identify the specific chain of activities that cannot be delayed without affecting the project completion date. The path connecting these activities from the start to the end of the schedule is known as the critical path. A CPM schedule is developed in the form of a graphic model known as a network, a group of activities joined in a logical sequence to create a visual map of relationships and dependencies.

An early variant on the critical path method was known as PERT (Program Evaluation Review Technique) which was deployed in the engineering and development program for the US Navy’s Polaris missile. By highlighting the longest paths through the multitude of tasks required, PERT allowed the project managers to prioritize the activities that critically impacted project completion.

How to Construct a CPM Schedule

Construction of a CPM schedule requires a work breakdown structure, a hierarchical decomposition of the entire project listing every deliverable. Activity durations, predecessors, and dependencies are calculated, and the milestones or major phases of the project identified. This data enables the calculation of the longest path the activities will take to reach the end of the project as well as the early start, early finish, and late start and late finish dates for each activity that must be maintained to achieve the project completion date. The difference between a job’s early start and its late start (or between early finish and late finish) is called total float. Total float represents the maximum amount of time a job may be delayed beyond its early start without delaying the overall project completion date.

Gantt charts and network diagrams provide the visual display of project work in CPM. Developed in the early 20th century, classic Gantt charts use horizontal bars across a linear representation of time to show the duration of tasks; however, these charts require additional steps to show dependencies. Network diagrams are usually built before a Gantt chart and can display the chronological flow of work from start to finish with the activities pinned to an early or late start date. 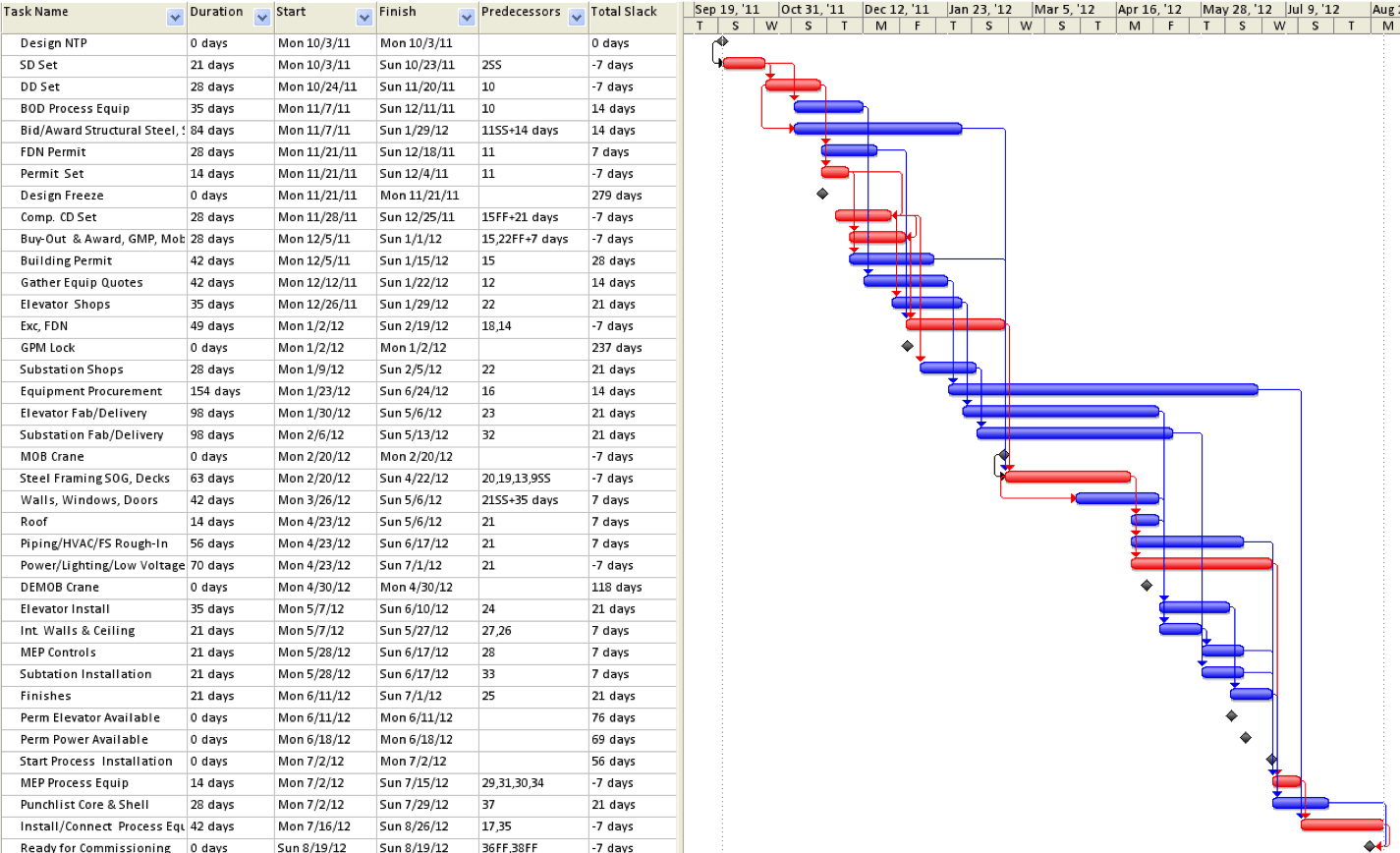 The critical path method was further refined in the mid-1960s by the development of the Precedence Diagramming Method (PDM) which represents activities assigned to boxes according to four types of lag relationships: finish-to-finish, start-to-start, and start-to-finish. Later, critics would argue that PDM was inherently open to manipulation by specialists in comparison to the older Arrow Diagramming Method (ADM). In the 1990s, PDM became the dominant method in CPM scheduling when Primavera’s scheduling software withdrew support of ADM upon its move to the Windows platform. Bar charts reappeared as the primary graphical summary of a schedule. Many scheduling experts observed that the while PDM offers relationship flexibility, the critical path is not as readily identifiable in a PDM bar chart; they also noted that the powerful Primavera program can override logic and remove restraints.

By generating only the early project completion risk curve, and therefore underassessing completion risk, CPM simulation introduces an algorithmic early bias in the probable completion dates obtained in CPM simulation. Moreover, without the interactive network view needed to illustrate the interplay among stakeholders crucial to building coordinated baselines, and with stakeholders ignoring the non-visual CPM presentation, schedulers often build unreliable and overly detailed baselines unsuitable for recovery action when needed. Because CPM schedules activities to start on early dates, an unrealistic completion distribution in CPM risk analysis results. CPM risk analysis tools do not model what commonly occurs when a project unfolds and activities start on dates later than early dates due to floating or pacing decisions based on schedule progress.

What is the Graphical Path Method (GPM)?

Enter the Graphical Path Method™ (GPM®), pioneered by Dr. Gui Ponce de Leon as an alternative to CPM to promote rapid, collaborative, and transparent project planning and to restore all stakeholders to the planning process. GPM began with the innovative Logic Diagramming Method (LDM) which retains the graphical simplicity of a user-controlled arrow diagram and offers relationship flexibility without requiring practitioners to go through the arduous process of learning the complexities of the conventional four types of PDM relationships. LDM relies on graphics technology where the visual display of diagramming objects depicting the evolving schedule is an intrinsic part of planning. The technology deploys an event-driven graphical user interface with multi-document capability and GPM algorithms and rules processors.

Why is GPM Advantageous?

GPM allows schedules to be created more intuitively and introduces innovative concepts that improve schedule optimization and analysis. GPM performs real-time calculations of network activity, propagating changes throughout the project network as they occur. Dates, durations, float attributes, the critical path, and resource profiles are free of reliance on a database-driven scheduling engine and all continuously refresh as the network is modified. For schedule updates, GPM reveals the critical path left of the data date. These real-time calculations provide invaluable information as schedules are built.

GPM risk analysis allows activities in each realization to float as a function of random sampling and decision rules, accurately modeling the real world where activities are delayed to take advantage of total float. GPMrisk analysis corrects for the early bias by allowing floating and pacing scenarios.

As embodied in NetPoint® software from PMA Technologies, GPM is easy for non-schedulers to understand and utilize effectively. This dynamic and interactive tool is rooted in logic and allows users to build and visualize complex project schedules more easily on a graphical timeline. The application utilizes a time-scaled canvas that allows users to plan and schedule a project collaboratively. A schedule is created in real-time by drawing or placing activities and events, along with their relationships, directly on the canvas. 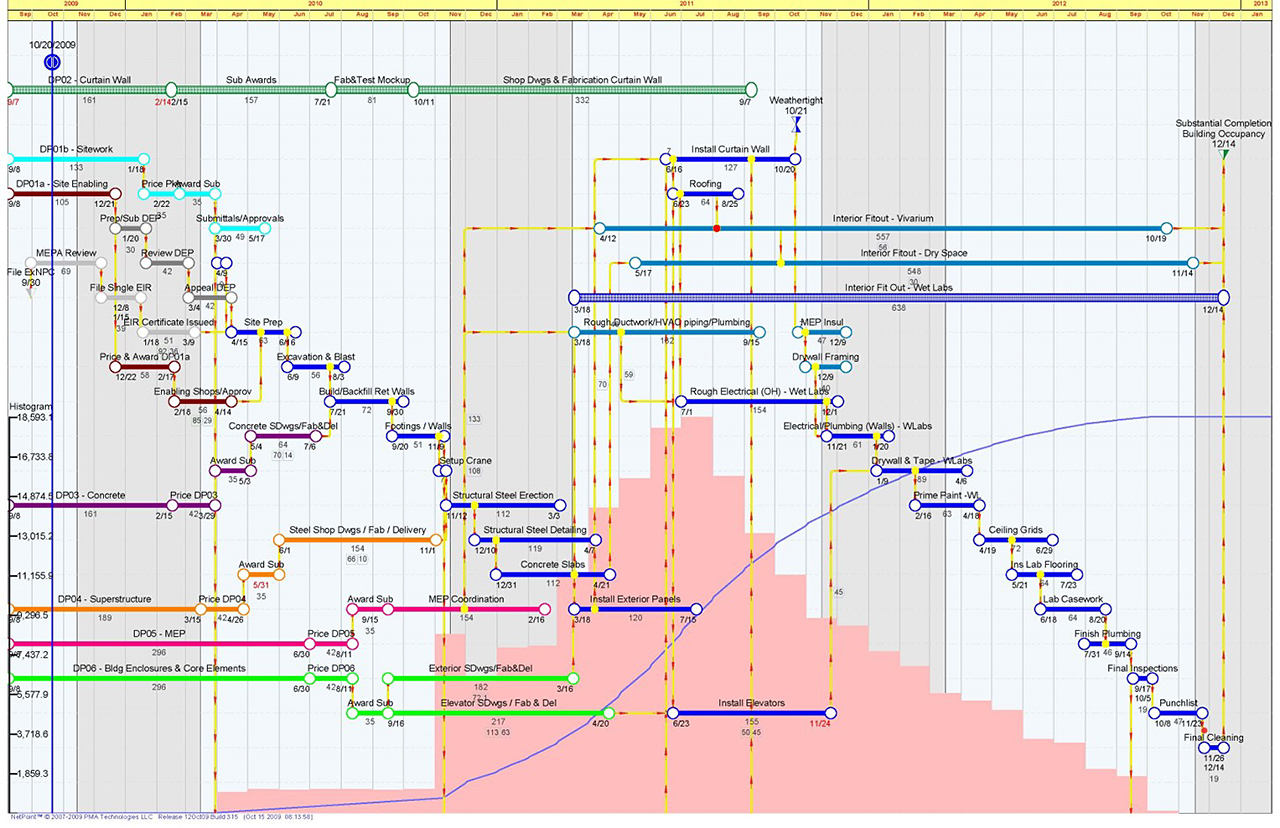 Once the NetPoint schedule is created, schedule risk analysis must be performed to mitigate project risk. A Monte Carlo-based risk-analysis tool for simulating CPM and GPM schedules, NetRisk empowers project managers to more accurately predict project completion dates and costs. NetRisk was developed in collaboration with industry-leading risk-management professionals and project schedulers. Its features are easy to use and include a customizable risk register that is tailor-made to define qualitative probabilities and impacts, prioritize by risk ratings, enter mitigation strategies, and record responses and comments, all in a single view directly within NetRisk.

Articles, Netpoint
Is your team keen to utilize the most important project management tools when planning their projects? Statistics indicate that organizations that adopt robust project practices are more likely to achieve their project goals (77% vs. 56%), stay within budget (67% vs. 46%), and meet deadlines (63% vs. 39%), and much less likely to experience total ... Read more
Articles, Netpoint